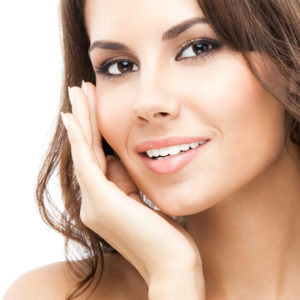 A facelift, or rhytidectomy, is a procedure to improve visable signs of aging in the face and neck. This procedure may be right for you if you are bothered by signs such as; sagging in the midface, deep creases below the lower eyelids, deep creases along the nose extending to the corner of the mouth, jowls, or loose skin and excess fatty deposits under the chin and jaw.

Other procedures such as a brow lift, to correct a sagging or deeply furrowed brow, and eyelid surgery to rejuvenate aging eyes can be performed at the same time to enhance the results of a facelift. However, you should keep in mind that a facelift won’t change your fundamental appearance and cannot stop the aging process. A facelift can only be performed surgically. Non-surgical procedures cannot achieve the same result but may delay the time at which a facelift is necessary and can also compliment the results of a surgical procedure. During the consultation you will discuss with Dr. Kim your goals and expectations for the procedure. It is at this time you should make him aware of all medical conditions and treatments that you currently have along with any medication use.

Dr. Kim will go over the options available to you regarding the facelift and facial rejuvenation as a whole. An evaluation of your health status and any pre-existing conditions may be necessary. He will alos discuss the likely outcome of a facelift and the risks or potential complications.

Dr. Kim will give you specific instructions on how to prepare for surgery, including guidelines on eating and drinking, smoking, and taking or avoiding certain vitamins and medications. Carefully following these instructions will help your surgery go more smoothly.

If you smoke, it’s especially important to stop at least two to three weeks before and after surgery; smoking inhibits blood flow to the skin, and can interfere with the healing of your incision areas. Even with stopping smoking before the procedure you may be at increased risk for complications.

Whether your facelift is being done on an outpatient or inpatient basis, you should arrange for someone to drive you home after your surgery, and to help you out for a day or two if needed.

Gallery Look and Feel Your Best

Where your surgery will be performed

A facelift may be performed in a surgeon’s office-based facility, an outpatient surgery center, or a hospital. It’s usually done on an outpatient basis, but some surgeons may hospitalize patients for a day when using general anesthesia. Certain conditions such as diabetes or high blood pressure should be monitored after surgery, and may also require a short inpatient stay.

Medications are administered for your comfort during the surgical procedure. The choices include intravenous sedation and general anesthesia. Your doctor will recommend the best choice for you.

A facelift usually takes several hours-or somewhat longer if you’re having more than one procedure done. For extensive procedures, some surgeons may schedule two separate sessions. Every surgeon approaches the procedure in his or her own way. Some complete one side of the face at a time, and others move back and forth between the sides. The exact placement of incisions and the sequence of events depends on your facial structure and the surgeon’s technique.

Depending on the degree of change you’d like to see, your facelift choices include a traditional facelift, limited incision facelift or a neck lift.

A traditional facelift incision often begins in the hairline at the temples, continues around the ear and ends in the lower scalp. Fat may be sculpted or redistributed from the face, jowls and neck, and underlying tissue is repositioned, commonly the deeper layers of the face and the muscles are also lifted.

Skin is redraped over the uplifted contours and excess skin is trimmed away. A second incision under the chin may be necessary to further improve an aging neck. Sutures or skin adhesives close the incisions.

An alternative to a traditional facelift uses shorter incisions at the temples, continuing around the ear and possibly within the lower eyelids or under the upper lip.

Sagging jowls, loose neck skin and fat accumulation under the chin may be corrected with a neck lift. The neck lift incision often begins in front of the ear lobe and wraps around behind the ear ending in the lower scalp.

Once healed, the incision lines from a facelift are well concealed within the hairline and in the natural contours of the face and ear.

The visible improvements of a facelift appear as swelling and bruising subside. Your final result should not only restore a more youthful and rested appearance, but also help you feel more confident about yourself.

Dr. Kim and/or staff will explain in detail the risks associated with surgery. You will be asked to sign consent forms to ensure that you fully understand the procedure you will undergo and any risks and potential complications.

The risks include but are not limited to:

After the procedure you will be wrapped in a light bandage and may or may not have a drain tube. The tube is usually removed the next day when the bandages are removed. Sutures or staples in the hair may be removed at a week to 10 days. Swelling will be present for several weeks but most of the swelling will resolve in the first couple of weeks.

Sun protection will help to maintain your rejuvenated appearance by minimizing photo-aging or sun damage. In addition, a healthy lifestyle will also help extend the results of your rejuvenated, more youthful appearance.